Did Santa get high?

Quick!  What does this image remind you of?  If you said or thought Santa, read on. 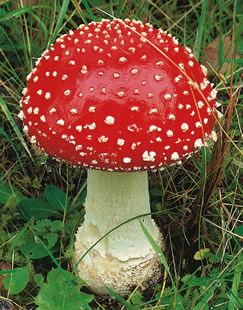 What do we really know about this  guy who climbs down chimneys dressed in red and white, and gives presents to children?

Well, we know he wears a bright red outfit, trimmed with white fur.
We know he has a white beard and glowing, red cheeks
He rides around in a sleigh pulled by reindeer.
He also flies around in the same sleigh pulled by reindeer that can fly.
And of course, he climbs down chimneys.
He puts presents into stockings hanging by the fireplace.
He has something to do with the North Pole.

That pretty much covers the sum total of our knowledge of Santa.

Now let's ask the question, "Why".

Why does Santa wear a red and white outfit?
Why is he an old man?
Why does he live in the frozen, northern wastelands, (instead of, for example, on an island in the Mediterranean)?
Why does he fly?
And again, why does he climb down chimneys?

A theory that answers all of these questions takes us to Siberia and the ancient traditions of the Siberian shamans.  At least we're in the right place - the frozen north lands.

The word 'shaman' comes from the Tungus-speaking people of Siberia, and it can be defined as a religious specialist.  The Tungusic are Russian indigenous people who live in the Arctic circle.  They are reindeer herders.

The shaman dealt with mushrooms, and their spiritual (hallucinogenic) properties, in particular with a mushroom called Amanita Muscaria, also known as Fly Agaric that causes visions and altered states.  It is also toxic, and must be handled in a particular manner so as to get the psychedelic effects without the toxic ones; and that was the shaman's job.  (For more on the subject of this marvelous mushroom, go to Little Foxes and the History of Civilization.)

Santa Claus, so the theory goes, is modeled on this shaman.  His appearance, his clothing, and his mannerisms all mark him as the reincarnation of these ancient mushroom-gathering shamans.  The shaman would also have been an old man, which explains Santa's white beard.

In fact, our current idea of a roly-poly Santa has him even looking like a round red and white mushroom.

One of the side effects of eating amanita mushrooms is that the skin and facial features take on a flushed, ruddy glow; and Santa is always shown with glowing cheeks and a red nose.

As for his jolly "Ho, ho, ho!", that could be the euphoric laugh of one who has indulged in the magic fungus.

Santa also dresses like a shamanic mushroom gatherer.  When it was time to go out and harvest the magical mushrooms, the ancient shamans would dress much like Santa, wearing red and white fur-trimmed coats and long black boots; probably ceremonial clothing to match the mushrooms.  (The white fur would be easy to get in the frozen north of silver foxes and other fur-skinned animals, but where did the red dye come from?)

What about the gifts in a sack slung over his shoulder?

The shamans would gather the mushrooms from under the sacred trees (coniferous trees, now Xmas trees) where they grew.

First they would hang the mushrooms on nearby pine boughs to partially dry.  This is why we decorate our Christmas trees with ornaments and light bulbs, because the gatherers would  adorn trees with drying mushrooms.

Drying the amanita mushroom before it is consumed is crucial; the drying process reduces the mushroom's toxicity while increasing its potency.

The dwellings in which these peoples lived were made of birch and reindeer hide.  They were called "yurts", and were similar to the teepees of the North American Indians.  The yurt's central smokehole is often also used as an entrance after snowdrifts have covered the lower parts of the yurt, where the regular entry flap would be located.

The shaman would take his sack of partially dried out mushrooms and enter the yurts through the smoke hole, (Santa coming down the chimney.)

He would distribute his gifts, the mushrooms, which would then be threaded on a string and hung around the hearth-fire to dry out.  Alternatively the mushrooms could be placed in socks and hung by the fire.  Socks were probably used because clothing amongst these poor peoples was crucial in winter, and anything that resembled a bag would have a more important function as a sock.  These traditions are echoed in the modern stringing of popcorn and other items, as well as the hanging of socks by the fireplace

The shaman would deliver his 'presents' on the evening preceding the winter solstice; and the mushrooms would be ready to share their revelatory gifts in the morning of the solstice.

Santa's famous magical journey, where his sleigh takes him around the whole planet in a single night comes from the "heavenly chariot," used by the gods Odin and Thor.  The chariot is now known as the Big Dipper, which circles around the North Star in a 24-hour period.

Possibly the reindeer would drink the urine of the people who were under the influence of the amanita mushroom and get 'high' and start prancing around.  Having experienced the magical effects and knowing them to be akin to flying, the people would come out of their yurts to watch and laugh at the 'flying' reindeer

These ancient peoples, including the Lapps of modern-day Finland, and the Koyak tribes of the central Russian steppes, believed in the idea of a World Tree.  It was seen as a kind of cosmic axis, the roots stretching down into the underworld, its trunk being the "middle earth" of everyday existence, and its branches reaching upwards into the heavenly realm.

The North Star was considered sacred, since all other stars in the sky revolved around its fixed point.  The top of the World Tree touched the North Star - and that is the true meaning of the star on top of the modern Christmas tree, (and also the reason that Santa makes his home at the North Pole.)

The active ingredients of the amanita mushrooms are not metabolized by the body, and so they remain active in the urine.   In fact, it is safer to drink the urine of one who has consumed the mushrooms than to eat the mushrooms directly, as many of the toxic compounds are processed and eliminated on the first pass through the body.

It was common practice among ancient people to recycle the potent effects of the mushroom by drinking each other's urine.  The amanita's ingredients can remain potent even after six passes through the human body.  Some scholars argue that this is the origin of the phrase "to get pissed," as this urine-drinking activity preceded alcohol by thousands of years.

Reindeer were the sacred animals of these semi-nomadic people, as the reindeer provided food, shelter, clothing and other necessities.  Reindeer are fond of eating the amanita mushrooms; they will seek them out, then prance about while under their influence.  Reindeer also enjoy the urine of a human, and they can get hooked on the urine which follows the consuming of the mushrooms.  Some tribesmen carry sealskin containers of their own collected piss, which they use to attract stray reindeer back into the herd.

Well, there is.  It's just a theory, but it covers all the bases, from chimneys to the North Star.
Posted by georgezaremba at 7:07 PM No comments:

Polonius gives this immortal advice to his son Laertes who is leaving home to begin his university education.

"I've been many things in my life, but the one thing I've never been is myself."

Reconciling these two quotations could mean the start of a new life.

Given the character of Polonius that Shakespeare was fleshing out, what his advice probably means is, "look out for yourself first; when you take care of yourself, you'll be in the best position to take care of others." In this case "true" would mean "loyal to your own best interests".  We shouldn't mistake this for Shakespeare's so-called "universal wisdom".  He was a writer of fiction after all.  It does make sense though; if you want to be charitable, you need to have the money to give.

Perhaps it's best to ignore this bit of realism.  Let's focus on the poetic sensibility of the lines and stick with a meaning where the poetry speaks to the heart.


Posted by georgezaremba at 7:45 PM No comments:

Columbus' Egg refers to a brilliant idea or discovery that seems simple or easy after the fact. 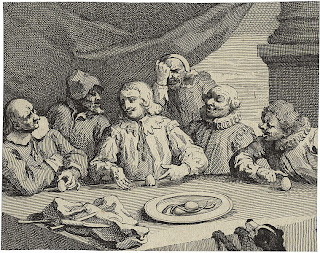 Italian historian and traveler Girolamo Benzoni in his book 'History of the New World', published in 1565, wrote that Columbus was dining with a number of Spanish nobles when one of them said: "Sir Christopher, even if your lordship had not discovered the Indies, there would have been someone else here in Spain, which is a country abundant with great men versed in cosmography and literature, who would have started a similar adventure with the same result." 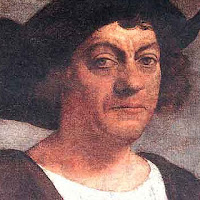 Columbus did not respond to these words but asked for an egg to be brought to him.  He placed the egg on the table and said: "I will lay a wager with any of you that none among you is able to make this egg stand on its end, which I will do without any kind of help or aid."  They all tried without success.  When the egg returned to Columbus, he tapped it gently on the table to flatten the tip slightly and so stood it on its end.  All those present understood what he meant - once the feat has been done, anyone knows how to do it.

According to Vasari (a chronicler of Renaissance artists), the young Italian architect Filippo Brunelleschi had designed an unusually large and heavy dome for Santa Maria del Fiore, the new cathedral of Florence.  City officials had asked to see his model, but he refused.

Instead he proposed that anyone who could make an egg stand upright on a flat piece of marble should build the cupola, since in this way a man's intellect would be revealed. None was able to accomplish the feat.  Whereupon Filippo was told to make it stand.  He took the egg graciously and gave one end of it a blow on the flat piece of marble, thus making it stand upright.

The craftsmen protested that they could have done the same.  Filippo answered, laughing, that they could also raise the cupola, if they saw the model or the design.  And so the decision was made to give Brunelleschi the commission to carry out the construction of the dome.

When the Duomo was finally built it had the shape of half an egg slightly flattened at the top. 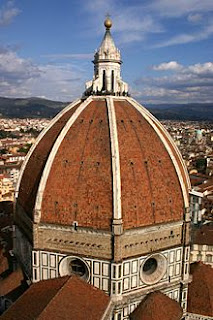 The concept of this story is a little different from Columbus' Egg, for that was a metaphor for those acts of creativity that give everybody 20/20 hindsight after the fact; the Brunelleschi story is more of an intellectual conundrum since his plan had not yet been revealed.

It is possible that Columbus, being Italian, had read the Vasari story, whereas the Spanish Grandees were not aware of it.

What could be more obvious than a website that would function like a private house where friends gather to talk in private, and invite other friends, and share photos, ideas, opinions etc.

But no-one did it till that guy from Harvard came up with Facebook - Columbus' Golden Egg.

If the story of Columbus' Egg says anything, it's this - the mark of  a creative mind is an ability to see the obvious.
Posted by georgezaremba at 8:16 PM 1 comment: