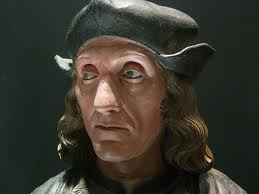 Henry Tudor, father of Henry VIII, grandfather of Queen Elizabeth I, effectively became king of England when his Lancastrian forces decisively defeated Richard III's Yorkist army at the Battle of Bosworth Field on 22 August 1485. - Richard is Shakespeare's hunchback king who cries out, "A horse! a horse! my kingdom for a horse!" before he's killed in the battle, thus ending the Wars of the Roses. 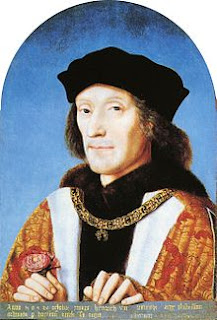 But Henry Tudor never called himself by the name Tudor.  That name was imposed on the dynasty by future historians starting with David Hume's History of England Under the House of Tudor published in 1759.  Henry shunned the name, preferring his peerage title of 'Richmond', after his father, the Earl of Richmond.  In sixteenth-century accounts of his life before he became king he was always called Richmond, including in Shakespeare's play 'Richard III'.  Thereafter of course he was called King Henry VII.

The name 'Tudor' was virtually meaningless to residents of the sixteenth century.  It doesn't appear in official documents of the time, nor does it appear in the accounts written by chroniclers of the age.

The name comes from the old Welsh name 'Tewdwr', derived from the Latin 'Theodorus', (a Roman name of Greek origin meaning 'divine gift'), which gives us the modern English personal name of Theodore.  In more modern Welsh 'Tewdwr' became 'Tudur', which was rendered into English as 'Tudor'. ‘Tydder’ was used by Richard III as a derogatory form of 'Tudor' to draw attention to Henry's allegedly low social origins.  In a letter he writes of 'Henry Tydder, son of Edmund Tydder, son of Owen Tydder..... for he is descended of bastard blood, both of father's side and of mother's side; for the said Owen was bastard born...'  Kind of like Gene Hackman's character in the movie 'Unforgiven" calling the Richard Harris character 'The Duck' instead of 'The Duke'.

Later came Perkin Warbeck, calling himself Richard IV, a pretender to Henry's throne, who issued a proclamation during the Bodmin uprising of 1497 in which he declared that Henry, grandson of "Owen Tydder of low birth in the country of Wales" had seized the throne.

These Tudor/Tydder associations may explain why Henry himself and his successors avoided using the word.

Owain ap Maredudd ap Tudur decided to adopt an English style surname.  The obvious choice should have been for him to have anglicised his father's name and become 'Owain Maredudd' or 'Meredith'.  For reasons unknown Owain rejected this option and selected his grandfather's name 'Tudur', and therefore became 'Owen Tudor'.

Today we could be speaking of the 'Meredith' dynasty instead of the 'Tudor' dynasty.

Posted by georgezaremba at 8:48 PM