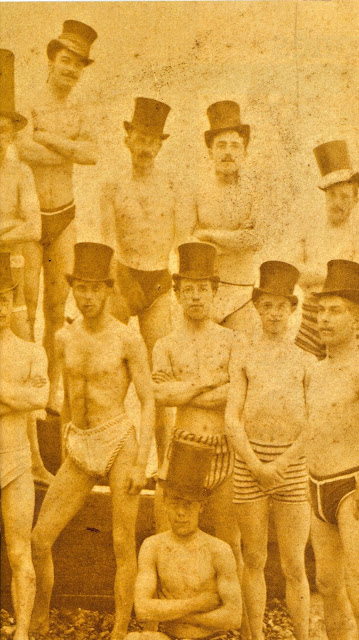 1863, the middle of the American Civil War.  That gives an idea of the time period of the photograph.  Note the physiques.  No six-packs.  Bodybuilding was not part of the health club culture of Victorian England.  Yet this was the England that was building an empire as large as that of Genghis Khan, and sending out young men like these to administer the vast domains.

From the top hats that they are wearing, they appear to belong to the upper classes.  The working classes, who do not appear to have been invited to participate in the activities of the Brighton Swimming Club, may well have had more solid physiques.  But just as Theodore Roosevelt writes in his "The Winning of the West: The spread of English-speaking peoples", the American frontiersman was seldom a match for the Indian in a one to one fight; so the English soldier, whichever class he came from, would seldom have been a match for a Zulu warrior.  But that is not what colonial warfare was about.  It was about firepower and military discipline, and character.

Victorian England was the age of the cold showers as a way of building character.  Even the Prime Minister of England, Benjamin Disraeli, was not immune to the cold shower craze; but he had a hard time pulling the trigger, and while he stood apprehensively under the shower, it devolved on his wife to actually turn on the cold water.

The photograph is from the BBC History magazine, August 2012
Posted by georgezaremba at 3:43 PM