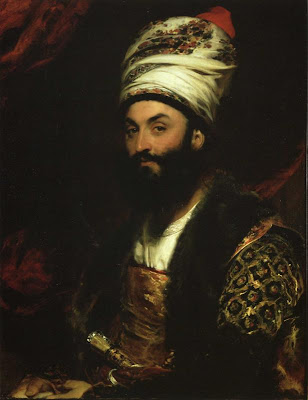 Painting of Abu'l Hassan, Persian Ambassador to the Court of St James (England), 1810. Painted by one of the greatest portrait artists of all time, Sir Thomas Lawrence.

What does aniconism mean?  It's the absence of images like paintings and statues in a particular society, such as Islam, where there is a proscription against the creation of images of sentient living beings.  Images of Allah are absolutely forbidden, followed by depictions of Muhammad, and then Islamic prophets and the relatives of the Prophet.

However, the depiction of all humans and animals is discouraged by the long tradition of Islamic authorities, especially Sunni ones.  This has led to Islamic art being dominated by Islamic geometric patterns, calligraphy and the foliage patterns of the arabesque style.

The painting above gives an insight into the results of this 'image deprivation'.

The painting was temporarily placed on a sofa, and the Persian Prime Minster, Mirza Shefi, entered the room.  He had never seen a European oil painting and he mistook the painting for the real person.  He is said to have become outraged and to have shouted at the offending painting:

"I think that when the representative of the King of England does me the honor of standing up to receive me, in due respect to him, you should not be seated."

Only when he had touched the painting did he realize his mistake.

He said, "I could have sworn by the Koran that it was a projecting substance - in truth that it was Abu'l Hassan himself".

Posted by georgezaremba at 8:54 PM