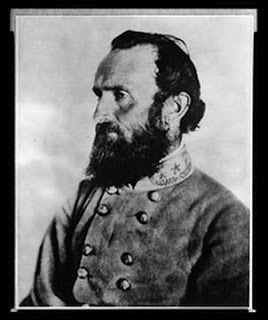 General Stonewall Jackson was fearless in battle.  He believed very powerfully that the time and place of his departure from life had been fixed in advance by God, and nothing he did could change that predicated moment.

"Captain, my religious belief teaches me to feel as safe in battle as in bed.  God has fixed the time for my death.  I do not concern myself about that, but to be always ready, no matter when it may overtake me.  Captain, that is the way all men should live, and then all would be equally brave."

You know how people are always mixing the phrase, "you know" into their conversation; well, it's not a new thing.  It was the same in Jackson's age, one hundred and fifty years ago.  Persons who, while speaking with Jackson, interlarded their conversation with the unmeaning phrase “you know” were often astonished by the blunt interruption that he did NOT know.

Posted by georgezaremba at 8:15 PM