Little Foxes and Mushrooms and The History of Civilization

The following popthems are from Robert Graves' book, 'Food for Centaurs'.  They are about this mushroom, the amanita muscaria, aka. fly-amanite, fly-agaric: 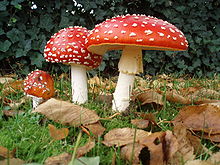 Mycophobia, the irrational fear of mushrooms, felt by a great part of mankind, is a leftover from some ancestral religious awe.  Mushrooms were used by initiates in ancient religious ceremonies that were choreographed to inspire awe.  The purpose was to reserve the "religious" experience for a select few, and to use the awe as a barrier to keep the remainder of mankind at a distance.

The ordinary Greek word for 'mushroom' is 'mukes', which also means 'nasal mucous' or 'snot'.  To turn something into a taboo item you associate it with something disgusting; perhaps some body function.


The English abstain from horesflesh because their Saxon and Danish ancestors had once participated in a sacramental October horse-feast, the greatest holiday of the year, though horseflesh was taboo at all other times.  When the Church banned this feast as idolatrous, the awe it had inspired changed to revulsion.  It's an example of how taboos work.

The food of the gods.

What is 'ambrosia', the food of the gods, the drink that confers immortality?  The grammarians of ancient Greek define ambrosia as a thick porridge of honey, water, fruit, olive-oil. fruit and pearl-barley.
So lets take the recipe and write it down in tabular form:

Now the recipe for nectar specifically:

Finally the recipe for 'kukeon' ('mixture'), the draught that the Goddess Demeter accepted in the palace of King Celeus, by which she broke her fast and which was thereafter imbibed in her honor by the initiates of the Greater Mysteries, 'Kukeon' is mint-water mixed with pounded barley:

Now lets examine the three sets of the initial letters:

Ambrosia, the food of the gods, that which confers immortality refers to mushrooms, (specifically - hallucinatory mushrooms).

The mystic vision was granted only to the initiates, who guarded the secret under penalty of death.

Here's some of what they saw in their visions:

'The corn was orient, and immortal wheat,
That never had been sown and never could be reaped'.

In Spring, which is the flower season, there was another ceremony which was called 'anthesterion'.  Since this word begins with 'anthos' which means (flower), doesn't it follow that the 'mu' at the beginning of 'musterion' would refer to mushroom.  Seems like a no-brainer.

'Mukes' is mushroom and 'muos' is fly (as in the insect), and the syllable 'mu' as in musterion could come from either one or the other. What is the significance of 'fly' in this context and what is its connection to "mushroom"?  I don't know.

And yet not a single mushroom figures in the works of Hesiod, Homer, and the Greek dramatists; no admission that it even exists.  Could it be a conspiracy of silence - quite natural if mushrooms were the hallucinatory agents used by the mystagogues of the Eleusinian Mysteries - a secret that nobody blabbed in the course of all those early centuries; and we must believe that there was a secret, for other wise we are left believing that the recipe that made the adepts of the Mysteries gasp in wonder was a soft drink of mint-flavored barley water - hardly!

Foxes with fire in their tails.

Little foxes with fire in their tails - that's what Samson sent against the army of the Philistines (Book of Judges), and this is how Graves explains this unlikely story:


How did Samson collect three hundred foxes and send them into the Philistine's cornfields with torches tied to their tails?  The Palestinian fox is not gregarious and the task of capturing three hundred of them, at the rate of one or two a day, and feeding them all until he had collected the full number would have been a senselessly exhausting one.  Besides, how could he make sure that the foxes would run into the cornfields and that the torches would stay lit?  The truth seems to be that Samson organized a battalion of soldiers - three hundred was the conventional Hebrew battalion strength, as appears in the story of Gideon-and sent them out with torches to burn the Philistines' corn.  Indeed, in the 1948 Jewish War of Liberation a raiding battalion was named 'Samson's Foxes'.

So what's the significance of the foxes?

Well, the juice of the amanita muscaria mushrooms (which still grow under the pines of Mount Tabor) 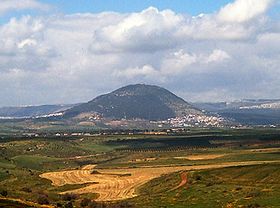 would make the raiders into a completely fearless fighting force - note the Viking Berserkers; and this variety of amanita mushroom, when dried, is fox-colored.  Are these 'little foxes' the amanita mushrooms?

Here's another mention of "little foxes' in the bible - In the Song of Solomon the Shulemite bride has been amorously addressing Solomon, calling him the turtle-dove in the clefts of her rock, and  urges her lover to fetch her 'the little foxes that spoil the vines, for my vines have tender grapes'.  She means that Solomon must fortify his manhood with mushroom-juice laced with wine, the better to enjoy her young beauty.

The term 'little foxes' is used in a number of cultures as a name for mushrooms.

Remember the Spartan boy who brought a fox into the school unknown to the Ephor (one of five rulers of Sparta elected annually), and made no sound though the foxes teeth were gnawing at his vitals.  Surely it would have been easier to throttle the fox than to disguise its presence under his short tunic.  But what if he had eaten fiery little foxes as a wager and the poison started working in his stomach, and yet he managed by a great effort of will to control himself before the ephor like a true Spartan.  Doesn't that make a whole lot more sense?


And then there's the magical mushroom that Alice found growing in Wonderland.  The caterpillar sat on it smoking his hookah.  Lewis Carroll had read about its properties not long before he published the book; the properties  included the same hallucinations about height from which Alice suffered after nibbling the mushroom.

A mixture of amanita muscaria with whisky has long been used as a drink by salmon-poachers in Scotland to celebrate a successful catch.  It is called a 'Cathy', in honour of Catherine the Great of Russia who is said to have been partial to it.

Dionysus's source of intoxication has always been politely attributed by Greek scholars to wine. Ambrosia is identified in the Oxford English Dictionary with Asclepias (milk weed); and by various Encyclopedias with almost every sort of plant except mushrooms.

The serpent of Eden.

The word paradise means 'orchard' in the Semitic languages; an orchard-garden of fruit trees, flowers and running water.  The inevitable serpent, familiar to readers of the Paradise chapter in Genesis might well be that bright snake-like formation which is a common symptom of a cerebral deoxygenization induced by hallucinogenic drugs; and seeing snakes is a common occurrence among alcoholics, saints who starve themselves, drowning sailors and sufferers from meningitis.

Connection of toads and mushrooms:

Why mycophobes called mushrooms 'toadstools' can readily be explained. When the toad is attacked or scared the warts on its back exude bufotenin, the poison secreted in the white hallucinogenic warts of the amanita muscaria.

In ancient Greece the toad was the emblem of Argos, the leading state of the Peloponnese.

The capital city of Argos was Mycenae ('Mushroom City') said to have been built by Perseus ('the destroyer'). 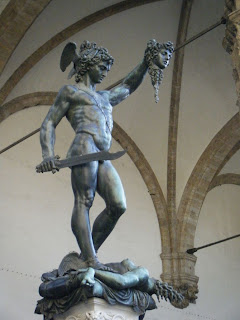 
According to Pausanius,  Perseus had found mushrooms growing on the site beside a spring of water.

Mycenae is the home of Agamemnon who, from here, launched his campaign against Troy to gain the release of Helen - the basis of The Iliad.

The division of the Peloponnese into three states had been made by a legendary king named Phoroneus, which seems to be a form of Phryneus, meaning 'Toad-man'.  The emblems of the two other states are also connected with the mushroom: namely fox and serpent.

The toad was also the emblem of Tlaloc, the Mexican God of Inspiration, and appears surrounded by mushrooms in an Aztec mural painting of Tlalócan, his Paradise.

Probably because their remote ancestors were nomads on the treeless steppes and unacquainted with amanita muscaria.  Their fermented mare's milk, called kavasse (Kumis), satisfied their need for occasional intoxication.  Like the Arabs in their desert poverty they had learned to eat any growing plant or living animal that was not poisonous.  Bavaria which was once invaded by Slavs is not mycophobic, while the rest of Germany is.

Posted by georgezaremba at 8:54 AM