The Right Stuff, Astronauts and Actors 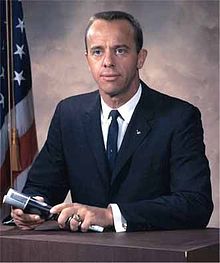 The movie The Right Stuff is about the first seven astronauts of the American Mercury program, and the great test pilot Chuck Yaeger. The following Popthems expand on some of the incidents shown in the movie.

The first American to go into space was Alan Shepard played in the movie by Scott Glenn.   On May 5, 1961, 23 days after the Russians sent Yuri Gagarin into space, Shepard piloted the Freedom 7 mission.  Unlike Gagarin's 108-minute orbital flight, Shepard stayed on a ballistic trajectory (basically up and down)—a 15-minute suborbital flight which carried him to an altitude of 116 statute miles.

The euphoria that followed the flight may seem extravagant to us today given that the flight lasted only as long as the time it would take to eat a hamburger. But it meant a lot at the time.

Shortly before the launch, Shepard said to himself: "Don't fuck up, Shepard..."  This quote was reported as "Dear Lord, please don't let me fuck up" in The Right Stuff, though Shepard confirmed this as a misquote.  The latter quote has since become known among aviators as "Shepard's Prayer."

He nearly 'fucked up'.  When he tried to observe the scene below him, he noticed that he had forgotten to remove the grey filter from the periscope.  He tried to remove it, but as he reached for the filter knob the pressure gauge on his left wrist banged into the abort handle.  He carefully pulled his hand away without removing the filter.  He observed the wondrous sights below through the grey slide, but still said "What a beautiful view!"

According to Gene Kranz in his book, Failure Is Not an Option, when reporters asked Shepard what he thought about as he sat atop the Redstone rocket, waiting for liftoff, he replied, "The fact that every part of this ship was built by the low bidder".

After a dramatic Atlantic Ocean recovery,  Shepard observed "It's not the fall that hurts; it's the sudden stop".

During the pre-launch countdown a small electrical part had a problem and this resulted in an hour and twenty six minute delay.  Shepard was on top of the Redstone rocket for so long now that he had to urinate.

The liquid pooled in the small of his back. His heavy undergarment soaked up the urine, and with 100 percent oxygen flowing through the suit he was soon dry.  The countdown resumed.

The name "Freedom Seven" was Alan Shepard's choice. "Freedom" because it was patriotic and "Seven" because it was the seventh Mercury capsule produced. It also represented the seven Mercury astronauts. To help relieve any tension Shepard might have built up before his flight, Glenn pasted a little sign on the spacecraft instrument panel, reading "No handball playing here." This bit of humor hearkened back to their training days.


Ten years later, at age 47 the oldest astronaut in the program, Shepard commanded the Apollo 14 mission, piloting the lander to the most accurate landing of the Apollo missions. He became the fifth person to walk on the Moon, and the only one of the seven Mercury astronauts to walk on the moon. During the mission he hit two golf balls on the lunar surface.

On July 21, 1961, Gus Grissom was pilot of the second Project Mercury flight, popularly known as Liberty Bell 7.   He was played by Fred Ward. 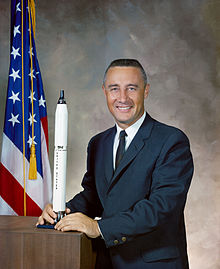 The flight was a suborbital flight and lasted 15 minutes and 37 seconds.  After splashdown, emergency explosive bolts unexpectedly fired and blew the hatch off, causing water to flood into the spacecraft.   Grissom asserted he had done nothing to cause the hatch to blow.  In the movie we are led to believe that Grissom had panicked and and blown the cover off.  This is what the NASA engineers are shown in the movie to believe.

In reality NASA officials eventually concluded that Grissom was correct.  Initiating the explosive egress system required hitting a metal trigger with the side of a closed fist, which unavoidably left a large, obvious bruise on the astronaut's hand, but Grissom was found not to have any of the tell-tale bruising.  Fellow Mercury astronaut Wally Schirra, at the end of his October 3, 1962 flight, remained inside his spacecraft until it was safely aboard the recovery ship, and made a point of deliberately blowing the hatch to get out, bruising his hand.

Gus Grissom died on January 27, 1967 when he and two other astronauts burned to death in the command capsule during a pre-launch test.  An investigation revealed a wide range of lethal hazards.  These were fixed and the Apollo program reached its objective of landing men on the Moon.


John Glenn was played by Ed Harris.  He was the first American to orbit the Earth, aboard Friendship 7 on February 20, 1962,

What were those mysterious 'fireflies' that Glenn saw during his orbital flight?  The mystery was solved later that year, when another Mercury astronaut, Scott Carpenter, made his orbital flight aboard Aurora 7.  Carpenter also reported seeing the particles, and to him they looked like snowflakes.  Carpenter was close to the truth.  They were bits of frozen condensation on the capsules’ exterior that broke off as the capsule moved through areas of varying temperatures. 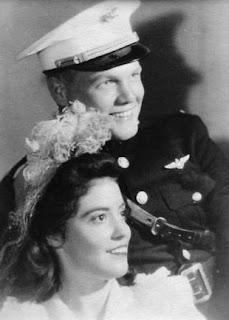 Posted by georgezaremba at 9:28 PM