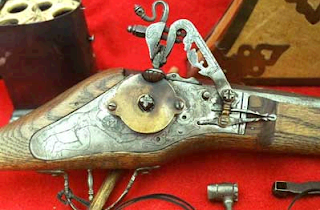 In 1522, the city of Ferrara in Italy forbad the carrying of crossbows or firearms into the city, day or night.  (The city ordinance specifically mentioned wheel locks which were mechanical and did not need a lighted fuse).

In 1523, the ordinances became more draconian:

..."and since an especially dangerous kind of firearms have come to be used, which are called vulgarly 'stone guns', (wheel locks) with which a homicide can easily be committed; in knowledge of this, His Excellency, knowing that these are devilish arms, prohibits their being carried without express authorization, under penalty of having a hand publicly cut off..."  ..."because these arms are being used more and more for murders and assassinations"...

Often however the ban came to be applied primarily to wheel locks that were short enough to be concealed in clothing.  Even these short firearms could usually be kept within the confines of the house; and longer firearms could be carried (as long as they were unloaded) from one's home to the city gates, at which point they were beyond the confines of the city and could be loaded.

This is 350 years before dodge City.

In Florence in 1547, the Duke of Florence forbad the carrying of firearms that were short enough to conceal.

In London the practice of taking potshots at birds was probably becoming dangerous to humans because of poor marksmanship of the shooter - or so it would seem from a Parliamentary ordinance of 1549:

...noe person under the degree of Lord in Parliament shall henceforth shote in any handgunne within any citie or towne at any fowle or other mark, upon anie church, house or dovecote, neither shal any person shote...any hayl-shot (bird shot) or any more pellets than one at a tyme, upon payne of tenne pounds...
Posted by georgezaremba at 7:44 PM