Plato and the Olympic Games 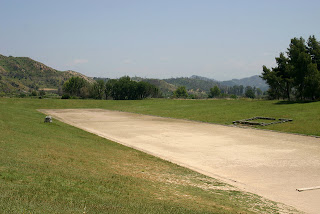 The Olympic Games were held at four-year intervals, and later the term Olympiad (the period between two Games) was used as a measure for counting years.  For example, Diodorus states that there was a solar eclipse in the third year of the 113th Olympiad, which must refer to the eclipse of 316 BC.  This would give a date of 765/6 BC for the first year of the first Olympiad.

The Olympic Games were held in Olympia, in a remote area of southwestern Greece, about 200 miles from Athens.  To get there most spectators had taken rough mountain roads and a ten-day journey.  When they got there they found a venue poorly prepared to accommodate them.  "An endless mass of people" is how second-century A.D. author Lucian describes it.

Whatever facilities Olympia had would have been swamped.  At night most of the spectators would have flung their bedding wherever they could find a spot, or they would have put up a tent or paid for a spot in some temporary shelter.  Sounds like Woodstock.

Plato himself once slept in a makeshift barracks, head to toe with drunken strangers.  An image of Plato as a hippy - probably in his younger years. 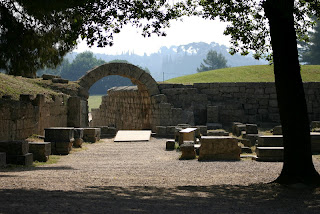 Dried riverbeds used as latrines, and sweat of unwashed multitudes wafting out nose-teasing odors; and everywhere the flies, a plague of them.  Priests at Olympia sacrificed animals to "Zeus, the driver-away of flies" probably to little effect.


The spectators stood for up to sixteen hours.  Seating was not provided.  In fact the Greek word stadion means 'a place to stand'.


"But" said Epictetus, "you put up with it all because it is an unforgettable spectacle."

Lucian writes,  "..... you should be there sitting in the middle of the spectators, looking at the men's courage and physical beauty, their marvellous condition, their skill and invincible strength, their enterprise, their emulation, their unconquerable spirit, and their never-wearied pursuit of victory.  Oh, I know very well, you would never have been tired of talking about your favourites, cheering them on them with your shouts and hand gestures."  He could be writing today not eighteen centuries
The Games were sensationally popular, and were held without fail every four years from about 765 B.C., till they were banned as a pagan festival by Christian emperors in A.D 394.

Like a pilgrimage to Mecca, for the Greeks it was considered a great misfortune to die without having been to Olympia.  One Athenian baker boasted on his gravestone that he had attended the Games twelve times.

Some observations on the Olympic events:

Sprinters would be leaning slightly forward, feet together and arms outstretched.  False starts were punished with a thrashing from official whip-handlers.

The pankration was a kind of mixed martial arts contest; differing from today's MMA in that the only thing barred was eye-gouging; whereas snapping opponents' fingers, even tearing out intestines were acceptable and, as one coach noted, "the judges approve of strangling".  It is said that Plato [427-347 BC] was a double winner of the pankration, which adds a new dimension to his philosophy.

The long jump was performed with a weight in each hand which would have the effect of "pulling'  the jumper forward, and then, jettisoning the weights backward prior to landing would give that final "push" for distance.

A four hundred yard sprint was run in full body armor, emulating the charge of the Greek hoplites into battle.

Boxing became increasingly brutal over the centuries.  Initially, soft leather covered the fingers, but eventually, hard leather weighted with metal was sometimes used.  The fights had no rest periods and there were no rules against hitting a man while he was down. Bouts continued until one man either surrendered or died.  However, killing an opponent was frowned on, and the dead boxer was automatically declared the winner.

The judges sometimes took bribes.  In A.D. 67 they took some pretty heavy bribes from the emperor Nero to award him first prize in the chariot race - notwithstanding that he fell out of his chariot and failed to complete the course.  Like Sacha Baron Cohen's movie 'The Dictator' in which he wins the sprint by shooting anyone who threatens to beat him.


From an article in the Smithsonian, August 2004, by Tony Perrottet.
Posted by georgezaremba at 10:13 PM